In the constant drive to deliver to you, dear Internet reader, quality, thought-provoking content that touches you on a deep spiritual level we bring you today’s topic. A drive that you may, or may not, agree on us reaching. I just like to try to write down my thoughts using an expansive vocabulary in order to portray myself as an intellectual, we all know I’m not kidding anybody…

The Internet is right up there as one of the potential greatest inventions of the 20th century, I remember first hearing about it on the now defunct Tomorrows World program where it was referred to as the Information Super Highway and would transform the way in which we lived. They talked about virtual communities living out there in cyberspace and traditional boundaries dropping off as we increased the reach of our social interactions.

I don’t think back then that anyone really grasped the true extent that the Internet would seep into the lives of our fellow Earthicans, rending asunder boundaries drawn on maps and opening us up to people and places we’d never been before. It also eventually provided us with categorical and unequivocable evidence that Trolls do not just live under bridges.

When I first started gaming in the Nineties the extent of the community and the discussions I had were restricted to either friends or the local gaming store when I popped in and talked to staff. Now, I didn’t grow up with a huge number of friends interested in the same hobby as me so I also took a rather unique avenue of just drifting through on my own. I didn’t go into the local GW to play, just to pick up the latest releases. By the mid Nineties dial-up was becoming more prevalent and eventually my father’s PC was hooked up and I got my first taste of Internetdom. This was all related much more to PC gaming than wargaming though.

One Christmas I then got a home DSL kit allowing me to no longer have to hog the phone for 2 hours at a time before BT disconnected the modem and I’d have to redial. This then brought about speedy access to all kinds of wonders and the Internet, for me at least, truly came alive and not just because you had free access to women of loose morals flashing their jubblies around.

These days the Internet is bursting with communities and forums for pretty much anything and everything you can think of but what has this done to our particular hobby? And is that a good or a bad thing?

Firstly, let’s start off with the glass half full and talk about the positive. The resources available to players is massive, there are forums for games and armies, a wealth of information on how to go about painting our toy soldiers or even converting them into something completely different. The inspiration available to be able to view the skills of so many different people really helps you find your place, either as a master artist or realising that even if you thought you were bad, that kid selling “pro-painted” on eBay is way worse than you.

The Internet also allows the gamer to become aware of stuff that he or she may not otherwise come to recognise. I found Warmachine through the Internet as before that I’d been a GW purist as that was all I really knew about due to their high street presence. What the Internet has helped to do is to open up competition as it is now a lot easier to research a game rather than the opinion of a store owner or splashing out on the rulebook and some models in the hope you’ll enjoy it.

If you need tips on an army then you can find other players who will help you out, either through unit selection or ways in which to improve yourself as a player. You can read battle reports, check out paint jobs, or even avail yourself of some pretty good deals on second-hand models or discounted brand new stuff. The Internet has broadened gaming, you are aware of new releases well in advance and can preview stuff you might like to grab in the future without having to wait for a magazine or even for it to arrive in stores. I don’t think there is anything that has been as transformative to many people’s hobbies, even outside of gaming, as the Internet has been. It is in virtually every home, at least in the western world and that kind of prevalence has been a boon for the diversity of information and avenues of discovery that we as consumers have access too.

Unfortunately, the Internet is not always a shining beacon of enlightenment. While we’d like to think that people united by a hobby could get on with one another there are the odd few people who will criticise and denounce people. If you take a sub-par choice for an army then you must be a n00b who clearly has no idea to play. Then there are also the vociferous remarks negatively viewing some companies (most notably the Sherriff et al). People can be overly critical to the point of being rude.

We can also look at the massive discounting of products online stealing market share from bricks and mortar stores that simply cannot compete against their virtual counterparts, this inevitably leads to the decline of local communities as the traditional congregating ground of the gamer disintegrates either through no-one visiting the store to get their goodies or through the store having to shut up shop. Does the fact that we are only a forum thread away from finding out the most powerful army lists actually prove detrimental to the game? There are many that will just take the latest web list and run that rather than try things out for themselves, after all the only point of gaming is to win right?

A lot of the forums have a tournament minded mentality too, therefore a lot of what you find is super-competitive style armies that are annoying to those of us wanting a chilled out game with friends. Buying your first army for a game can be a process of finding that uber-list point and click army and buying it rather than what I did when I started of buying what I liked and trying things out and in many cases, trying to make stuff work because I didn’t have anything else.

I cannot think of anything else in recent history that has proven as transformative to the hobby as the Internet, but then the world wide web has changed the face of how the world communicates and interacts anyway, we’ve definitely been left behind the curve here, in fact I’d probably say we are right up there riding the wave as it were. I have enjoyed being exposed to new things rather than being a GW purist and believe the market is blossoming, although perhaps a little too much.

I’m not going to declare an undying love for the transformation that the Internet has made to our hobby, but then I am not going to decry it either, I can see both good and bad here. Although there is certainly one thing that I think we can all take from this;

So we’ve played a few games now, and here’s a chap who seldom disappoints on the battlefield – my Isengard Troll Captain. I found him languishing at the bottom of my eBay bargain box I purchased a few weeks ago, and decided to do a speed paint job with The Army Painter system. It’s a system I have grown to love over the past few months. Yes, I know the results are not earth shattering but you do get a decent gaming standard model with minimal effort. Enjoy!

These puppies really are all over the Internet by now but just in case you’ve been hurriedly released from a POW camp in the deepest darkest depths of the New Forest and have only just now stumbled here by accident here is the latest in the previews from Sherrif of Rottingham’s private model foundries. 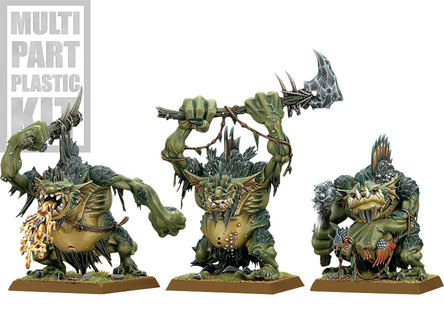 I’ll have to admit that I think these are rather cool. The old Trolls were sculpted at the same time mankind discovered fire and these guys are a massive improvement. As they are plastic should make them easily convertible for anyone playing Chaos too, although now there is a base to work off maybe we’ll be seeing other Troll kits in the future.

Now, these I am not sure about, I dare you to look at those boars without thinking of the below;

I like that GW are really trying to get useful units out in plastic now, generally saves the person a ton of cash in the long haul and means you aren’t going to be sporting biceps like Geoff Capes when you are forced to carry your army between venues, which can only be a good thing considering the exercise tendencies of most gamers.

Trolls are good, ALF Boyz, not so much.