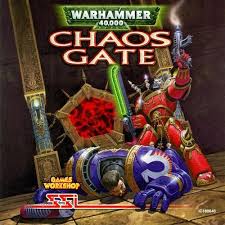 The rose tintedness of nostalgia!

I used to own this venerable PC game many years ago and remember it fondly. Since then I have changed computers and operating systems many times and it’s never worked properly since. The crash occurrence which plagued this game was in retrospect pretty funny; if any chaos cultists got close enough to shoot you with their laser pistols the game would immediately crash to desktop. Given that most levels contained more cultists than you had ammo this made game continuity pretty tricky.

I was digging through some old CDs and came across the Chaos Gate disc. I installed it, installed the patches and guess what? It freaking runs on Windows 7! The only change required was to run it in Windows 95 compatibility mode.

It’s still the tense, suspenseful game of all those years ago. It could be described as the tactical section of the original XCOM Enemy Unknown/UFO Defense set in the world of Warhammer 40k with a linear RPG campaign element. Obviously the graphics are blocky by today’s standards but still functional. The soundtrack is still pretty great, with plenty of monk-esque chanting tunes to lead your Ultramarines into battle with the forces of Chaos. If you can get your hands on this game it’s well worth checking out for fans of the genre.