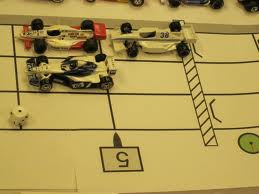 A few weeks ago I introduced a gaming friend of mine to Speed Circuit. For the uninitiated, SC is a positively ancient racing car game (1971). It’s rather unique in that there are no random elements or dice rolling in the course of normal play. Instead, you have to get your car around the track and other drivers as fast as possible using tactics and a resource pool of wear points which are depleted when you push your car beyond it’s limits. If you deplete your wear points you can start rolling dice to keep pushing, but at that point your opponent generally starts heckling your imminent appointment with the barriers.

It’s a really great game so unsurprisingly my friend has decided to run a season of races on a regular basis at his house. He’s prepared some circuits and this week saw our inaugural race at the Australian Grand Prix. Gribblin and I managed an epic battle for third and fourth place with non-citadel denizens coming in first, second and fifth. To make things interesting the rules also accommodate car improvements which might be used next time to add some further tactical options.

If you fancy checking out this out of print game, the best resource on the net for rules and tracks is:
http://lucidphoenix.com/sc/
Also, the BGG entry is here:
http://boardgamegeek.com/boardgame/1194/speed-circuit