I recently purchased one of GW’s latest models for the Tyranid range; the Tervigon/Tyrannofex kit.  I’ve assembled, but not painted the model (see pic) and it will hopefully one day look something like the picture on the right; 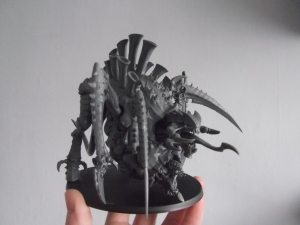 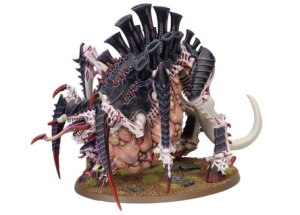 The kit is simple enough, and was fairly easy to put together.  I’m glad that GW finally got round to producing the model for Tervigon as it is one of my favourite choices to use in my Tyranid army.  I like it for more than its ability to spawn 3D6 Termagants a turn.  Its ability to enhance all friendly Termagants around it is more useful to me as I tend to use lots of the little critters.  The model itself looks great (as does the Tyrannofex build), although the base could do with being a little larger; it only just fits on the base.  For anybody thinking of putting one together I’d also recommend attaching the egg sac before gluing the legs on, it’s just easier that way.  I don’t know the full details of why it’s taken them so long to release the full range of models for the Tyranids.  They were missing 1/3 of their units until the other month and the addition of the Tervigon/Tyrannofex kit and the new Hive Tyrant/Swarmlord model has gone some way to changing this.  I wish they would get round to releasing the rest of the Tyranid range (especially a Mycetic Spore), though the new winged Hive Tyrant should be easy enough to change into a Harpy.

But that’s the grumbling over with. Over the past 12 months or so I’ve been impressed with the monster kits that GW has been producing for both 40k and Fantasy.  Like many an old gamer I may remember the days when most of the monsters were barely twice the height of a man, now they truly are MONSTERS.

The Tervigon is just one example, but there are many more; the Arachnarok Spider, the Thundertusk/Stonehorn and the Warsphinx/Necrosphinx are just a few. 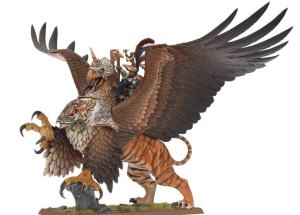 One of my personal favourites is the Vampire Counts Mortis Engine and to go with the new releases for the Empire a much needed new kit for Emperor Karl Franz which can also be made into a generic Empire General on a Griffon.  What can I say to this other than bravo!  I hope this is a trend  that will continue.  On a slight side note I’m impressed (and I mean really IMPRESSED) at the speed to which they are producing the Warhammer Army books, it was only three months ago that the Vampire Counts were released and now its the Empire’s turn.  At this rate it’ll only be another 18 months before pretty much the entire lot are done.