It isn’t often that (I believe anyway) I start a post with the kind of poor spelling/grammar that is very much enjoyed by a large section of the Internet world. However, being the veritable bubbling cauldron of manliness that I am, what with a penchant for spending my down time playing with plastic toy soldiers, there are a few newsworthy items that, upon catching my attention, spring forth in childish glee.

I am not referring to Servitob’s subtle manipulations of the laws of averages from our last game of Firestorm, but to something else that has graced my monitor. Being such a self-confessed geek, I am probably not alone in having a number of newsletters that arrive in my inbox on a rather frequent basis. One of them this morning was from a company I have bought miniatures from in the past and it included some info on new models coming out for Malifaux and a pre-order for things to come. This is the reason for my loss of control and posting such a misuse of abbreviation at the head of the post, I’ll even try to recreate the moment for you with the following; 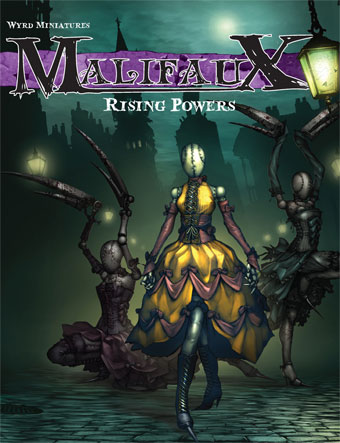 See that? THREE exclamation marks together… what is the world coming too? While the only partakers of the Malifaux deliciousness are myself and nBreaker at the moment it is a much-loved game. I was very impressed when I first tried it and the mechanics are unique enough to provide a game experience far different that what I am used to with the normal chucking of dice. Therefore the news that the game is expanding is really good news, especially with the final few models for the original release coming out as we speak.

Currently the details of what is in the book are sketchy, although there are pictures of the new starter kits that are coming out and from the colour text on the Wyrd site you get a feel for where the factions are heading. To save you the bother of searching I’ll include the pictures of the starter kits and some of my own descriptions.

Let’s start off with my current favourites, the Resurrectionists;

Oh yes, here we go, Asian themed Undead and there was me thinking that zombie hookers was where it was at. It’s really nice to see that the miniature’s quality is still as high as ever and I really like what they have done with these. It’ll be really nice once I can see what they do, they certainly stand out as rather unique among the current batch of Resurrectionists, whether this means there will be a whole new set of more Asian styled models coming into this faction we’ll have to wait and see, but I’m excited to see the spell and ability lists and look at how to absorb them into my games.

And as if that wasn’t enough, Wyrd seem to have taken all the things that I am drawn too in a typical manly fashion and carved them into pure gaming gold. When I first started looking at Malifaux I bought the Ortegas, feeling that hot female masters were the way to go, this lead to me then grabbing Rasputina who I first started working with when we finally got the game to the table. So really my first proper faction was the Arcanists. Raspy was awesome and laid down a lot of the early smackdown flinging around pillars of ice and cursing people with repeating spells of frozen doom. While nBreaker is now the happy custodian of my Guild stuff I still maintain my Arcanists and these have been sitting out recently due to the zombie hookers I mentioned earlier.

Have a guess what Wyrd has done? They’ve taken my lovely zombie hookers, added a heartbeat and released an entire squad of them as an Arcanist set… 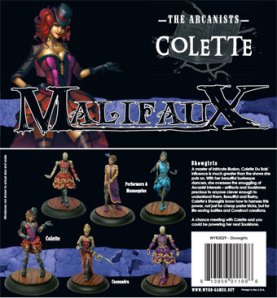 I don’t think I can even find the superlatives to describe my happiness. Again I know we don’t have any rules yet but the theme here and the amazing models mean that I can almost guarantee that these are going to be finding their way onto my table at some point in the near future. Each of the models is really characterful and adds a new facet to the Miners and Steamfitters Union. Although if I field my Convict Gunslinger alongside this lot I can’t imagine him looking where he is shooting too much.

Wyrd really do produce some quality metal and it is nice to see that the standard has not dropped since they went from a model company to a true gaming powerhouse. While this game may not have the exposure of Warhammer or Warmachine the niche they have carved for themselves is very welcome and I will be continuing to support their efforts on the apparent strength of their new stuff. Seeing an expansion so soon after the original game shipped is a testament to Malifaux’s popularity.

There are a couple of other starter sets announced too, Leveticus finally gets himself a box and yet more Gremlins appear too, although, I will not post pictures here in case anyone has a weak stomach, click the link already posted above to find out what hideous abominations are crawling out of the Bayou in August.

One of the other things to notice is the Terraclips stuff from World Work Games. I haven’t looked at their main site, just the stuff posted on Wyrd but if this stuff allows you to make a typical 3′ by 3′ field for gaming on I reckon on getting at least the sewer set, I think it looks fantastic as a rendering and if they can turn a finished product of similar quality they could well be onto a winner. the one problem we have at the moment is the amount of terrain we play with. While I have a pretty decent collection not all of it works for Malifaux and you do need to have quite a lot of the field covered for the game to work properly.

The fact that all this new goodness appears to be coming around August makes things even better. I love the fact that August is also my birthday and will be the one year anniversary of the blog too. I am hoping that we will get more details of other starter sets for the Guild and Neverborn in the not too distant future to round things out but the future is looking really bright for Malifaux gamers.