While not managing to get in a game over the weekend I did manage to have a read through the rulebook. It really is quite short but then again it’s not a complicated game to play, at least in terms of the rules, strategy is another matter. The accompanying campaign book is a lot thicker and I am looking forward to sinking my teeth into it over the next few days. I’ve also cut out all the models and pushed them together and am impressed by how snugly they fit. 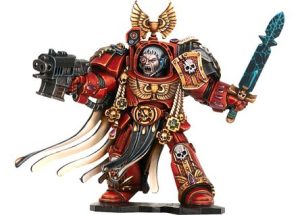 As with Space Hulk of old all actions cost action points. The Space Marine player restricted to 3 minutes a turn while the Genestealers enjoy a much more leisurely pace. In terms of action points a Terminator (if they die they certainly won’t be back) they get 4 a piece, whereas Genestealers get 6. Moving and turning cost differing amounts depending on which side you are playing but most things cost 1ap to perform. You can combine things like moving and shooting which costs 1ap thus allowing you to save action points. However, just like chess you’re going to want to have your moves planned out if you’re the Marine player as you are up against it time wise. Also, even though the ‘Stealer player is allowed to spend as much time as they want in their turn, you’ll also want to get done pretty sharpish in order to cut down on the thinking time your opponent gets. If you can make decisive decisions quickly when you’re playing the gribbly aliens then you are going to put even more pressure on the time sensitive warriors of Humanity and that can lead to unexpected mistakes which give you the openings to cram four limbs worth of armour piercing talons down their collective throats.

That’s not all as every turn the Marine commander gets to pick a token out of a cup which gives him a number of Command Points. These can be used as additional action points and, more importantly, can be used in the Genestealer turn. Ran out of time to put your dudes on Overwatch? Well, spend Command Points to lay down a suppressing fire with the Incinerators and fall back by squads to the APC….. ah-hem. Just be sure you remembered what was on that token though, you get to see it at the start of the turn but then it’s placed on the mission board and your opponent moves it according to your spend, at the end of the turn it’s turned over again and if you spent more Command Points than you were entitled to you lose the game immediately!

Overwatch allows you to basically stare down the corridor you are in and shoot anything that moves within range. Genestealer bursts out of a bulkhead in front of you? No problem, now you can gun it down, every step they take closing you down allows you to have another shot. However, if you roll any double on your dice, your gun jams and you have to spend time clearing it and with the speed of the Genestealers a jam at close range will probably result in Marine kibble.

Guard is effectively the melee equivalent of Overwatch, helping you out when a horde of aliens are determined of ripping you a new one. Definitely worth it if you’re staring down some of these guys and you have one of the more melee oriented Marines out front.

Some of the missions cause you to find an artifact or relic, while others want you to torch certain sections of the map (it’s nice to know that in the far flung reaches of the future mankind still resorts to chucking in gouts of smouldering napalm in order to complete missions). I’m lo0king forward to working my way through this as there are some maps that are played over more than one level (with the chance of falling down the stairs and breaking their neck in the cases of the Terminators) and some of the maps look like they use every single tile that comes in the box. I have yet to go through the whole book but they look varied enough on the face of it to keep things interesting. I want to play through it all and document the campaign here on the blog for you all to enjoy.

Rules wise therefore I give the game a whopping 9/10 Zombies. I’ll give a fuller rating once I’ve actually been able to play it.